Seeing as actually cycling has been a bit of a non entity in my life at the mo I’m having to get my bicycle fix in other ways. And oh did I find the perfect way to do so recently.

Whilst at my parents house searching for a tool I found the frame from my first proper mountain bike. My first decent spec one at least. My Saracen Dirt Trax 2000 (you can guess the year now eh!). 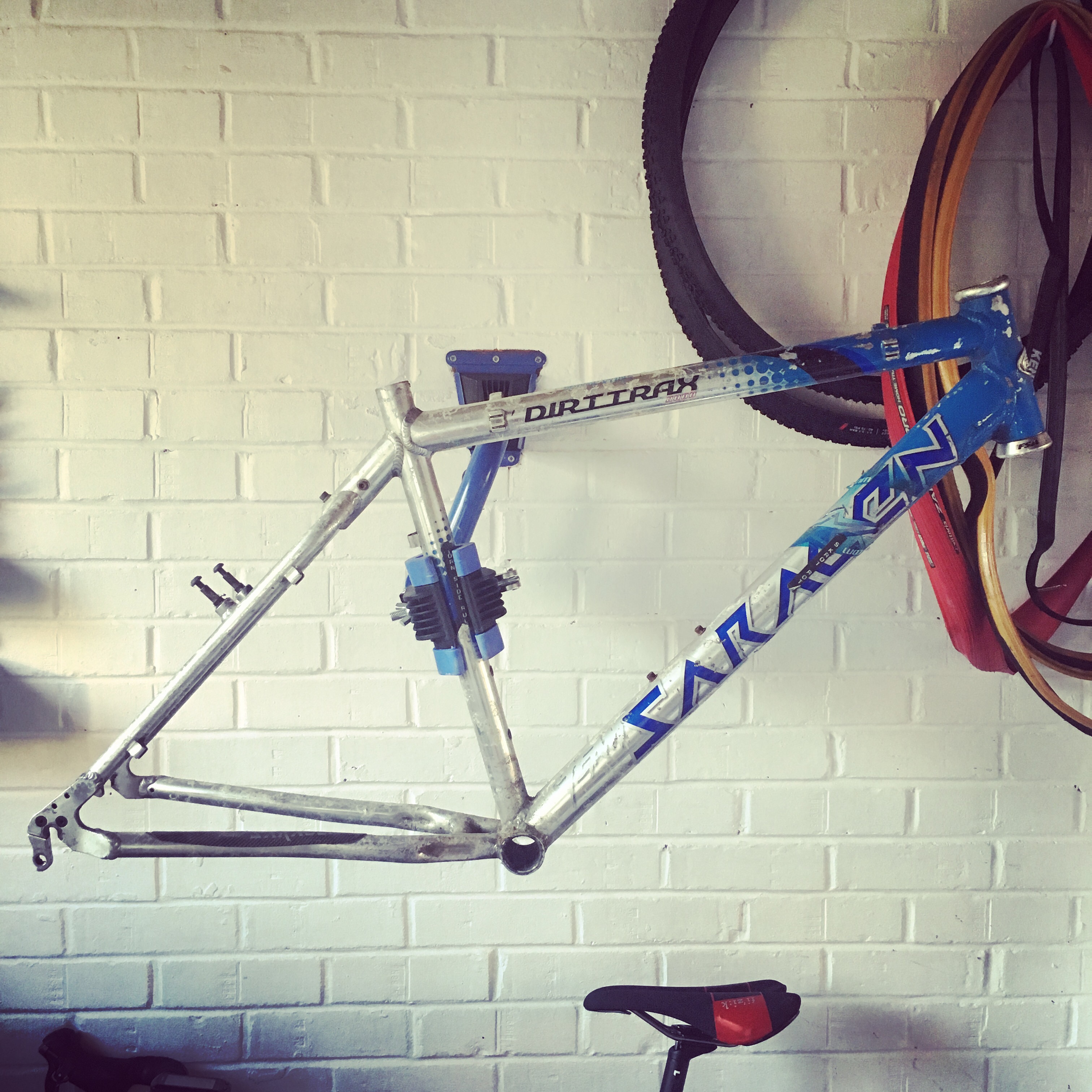 17 years ago this bike was my world. It took me everywhere, to work, to friends, and out on regular cycling adventures to Hengistbury Head, Iford BMX track, and St. Katherine’s hill. It was awesome.

It was the first bike I owned that had suspension and a front disc brake. They were both just for show though, the forks were Zokes units and the brake was an unbranded cable job that made more noise than it provided in stopping power. But hey it had an A-Headset! And that was kind of a big deal back then.

So what do you think went through my mind when I found it? (apart from mentally skipping around with glee), the instant thought was gravel bike. I’ve been mulling over my next purchase in my head (obviously the C60 is still top of the pile) and a gravel bike has been up there. To convert this though I had a think about how suitable the frame would be, what I would like for the spec, what I had lying around, and what I would need to buy.

Starting with the wheel size it should have been my first pointer to stop, the dirt trax runs 26″, and this has never really been a mix with drop bars. These two together are normally a cardinal sin but the lines between bicycle disciplines and designs are being blurred more and more nowadays and I had some mavic d521 on lx hubs so I thought let’s go for it. I also wanted rigid forks, don’t forget the bike was specced with shocks from new, so to accommodate I needed to look into the frames geometry and see if it was all possible. According to Saracen in 1998 (only catalog I could find) for the 17″ frame the head angle is 73′, top tube 55.5cm, and BB height is 29.2cm. All of these angles are pretty similar to a CX bike so it didn’t look like I was in for any nasty shocks. What I would have to re-evaluate is the fitting of a rigid fork, I needed to get a suspension corrected model to maintain the above figures. A quick hunt around eBay found some super light ones from China. Yes they were £50 delivered but were the correct geometry and 770g. So a bit of a bargain, biggest surprise was the delivery speed…. here in just over a week! Another eBay bargain in the puzzle were some race face evolve cranks and new Bottom bracket. Under £20 for the lot, I was well on my way.

Arrival of these allowed for the first mock up, letting me see exactly how the bike would feel to ride. Dropping it out of the stand and swinging my leg over made me feel all nostalgic, taking me back to the times this thing was hucked off of drops, forward hopped like a trials bike, and wheelied down the high street. Although in this incarnation I don’t think it will be seeing so much of my lairy side.

First thing I noticed was the drop and distance to the bars. Checking the stem out it was 120mm long! So that had to go and be replaced with something shorter with a little rise. The seatpost also looked awful, it needed a new headset, bar tape, cables, tyres, and brakes. I had a 10 speed 105 group set, but the rest was on the order list. Wanting to keep it as on budget as possible eBay was my friend again. Tyres and tubeless setup for £40, brakes for £30, cables £5, stem/seatpost/shim/seatclamp/bar tape £40, chain £10, headset £20. £210 spent on everything to rebuild. Peanuts really.

So what does it ride like? Well, last Sunday I gave it a baptism of fire and decided to take it on the woods cyclery gravel ride. Would it be uncomfortable? Would it fall apart? Would it want to throw me off at every opportunity? Would the tyres come off?

All answered with a no! In fact it out performed a few much newer bikes. No punctures and felt really solid but playful.

Only a couple of tweaks needed, the saddle and post position, and the bar height/angle. Maybe a wider set of bars?It’s a bit aggressive at the mo, it’s not far from my road bike! But hey this was a bargain build and if I can keep up and ride with the modern kit I think it’s fine for now……. but what about that paint…..

But for now let’s just ride it! More this weekend please!