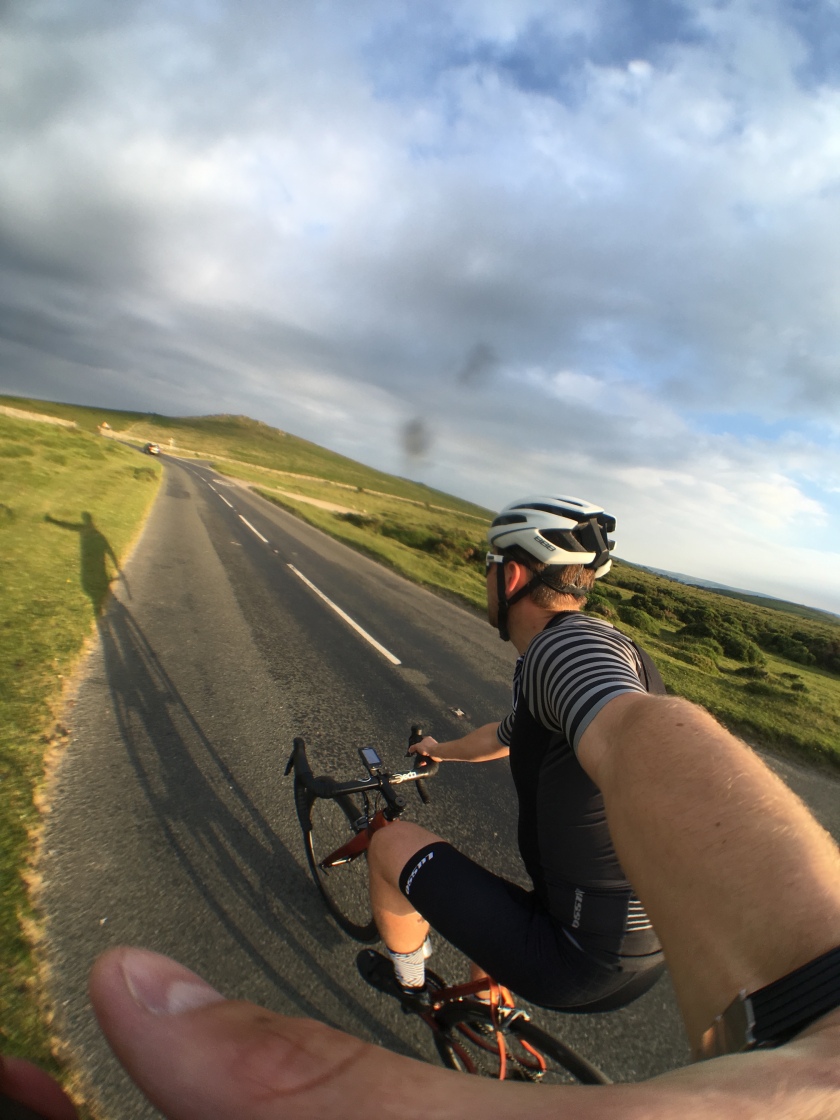 Recently my toils landed me in Torquay, with my stay catered for by a choice of local-ish premier inns (having a fully funded card is a great benefit, but sometimes a little more variety and a little less purple wouldn’t go amiss!). After reccy’ing the area it was Newton Abbot that landed the gig, it had perfect access to Dartmoor. A destination I have been keen on riding for a while. Dartmoor cycling tales are usually full of grinding climbs, windswept moors, treacherous descents, and breathtaking views. If you turned that list into bicycle bingo, I absolutely scored a full house in a 28 odd mile ride.

Whilst I’m not on a hunt to track down the top rated climbs around the U.K. if I see one local to a work stay I’ll go and have a crack at it. In this case, about 12 miles from Newton Abbot, was Widecome In The Moor.

Work done I checked in and stretched my power ranger suit on, the Ribble was unloaded from the car and I was off to find Dartmoor. The first five-ish miles out of Newton Abbot were relatively flat, a short intro before the inevitable but enough to warm the legs, and as soon as I crossed over the Devon expressway (A38) things started to go uphill. Fast. Obviously with no local experience my route was purely strava generated, I didn’t know the roads and believe me on Dartmoor this makes for some pretty entertaining moments. It’s difficult to judge your efforts up the climbs, and descents can go from fun to furious in seconds!

Like any slightly out of shape cyclist in unfamiliar territory I took it easy for the first few climbs, watching the elevation count grow on my Garmin. A tip for riding in a new area is to know your routes total climbing gain, and in which part of the ride those vertical gains are made. This makes it a little easier to try and calculate how far you should push your efforts. I always try and make some mental notes if i’m out in virgin territory. This paired with a heart rate monitor can make riding new routes a little easier, and it meant I had some juice in the bank for when the big climb showed up.

The first half of the ride was pretty consistent with 1200ft of elevation gain over 10 miles (totalling about 300ft of climbing overall). Punishing but consistent. You would have to ride 80 miles in the New Forest to get those kind of numbers. The route plotted took a nice scenic route around some villages and through some woodland south of Hay Tor, with the Tor being the highest point.

The second half of the ride was where the money shot was located, the big kahuna, Widdecomb In The Moor. Over 500ft of climbing in under one mile, thats an average gradient of 12% and a real grind. It even ramps up to 22% at one point so stop pedalling at your peril!

My experience of the climb was pretty enjoyable (for something that most people would class as a death sentence) and, despite having no more cogs left, I made it up without stopping. The first third of the climb is easy enough at under 10% but it soon starts to challenge you. There were points where a little weaving was needed to take the edge off the but that was fairly short, for the most its quite consistent at between 11% and 14%. The climb then tapers off slightly for the finale as you head towards Hay Tor, and the views up here are worth your efforts.

I was lucky with the weather, this was a little way back last year now (July/august), it made for stunning evening on the moor. Up at Hay Tor you are around 1400ft above sea level and the views are impressive to say the least. I hadn’t been to Dartmoor in over 20 years, and I suddenly started to understand my dad’s praise of the west country as a holiday destination. Stunning views taken in it was time to head back for dinner for one and purple carpet.

This is where it got really fun, I had 1100ft of elevation to scrub off in 4 miles. Whoop Whoop! I’d earned those turns. Riding back was mix of B roads and country lanes, I was able to build speed quite easily here (I hit 42.5mph according to Strava), as you can imagine with that kind of elevation drop. It wasn’t really a case of earning turns though, it was mostly straight (hence the top speed clocked) but because the route was unfamiliar it lead to some pretty enjoyable last minute junction choices and deep braking moments. A nice test for the ol’ reactions! as if the heart wasn’t pumping enough already……….

Back at the Premier Inn I certainly had a grin on my face. Like any great ride my legs and lungs had been well put through the mill and my eyes and mind were more than satiated with Dartmoor stunning beauty. My bicycle handling skills were put to the test and the weather was glorious. If I had to write a short review t would be: Ten out of Ten, would ride again! (but hey where would the blog post be!).

If you are looking for a uk ride destination I can thoroughly recommend Dartmoor. The climbs are epic, your legs will hate you, but your smile will last for weeks. Get a plan together and go visit!