After having a pretty manic start to the year I’ve felt it’s time to get a bit of a grip on my cycling fitness. It’s been sidetracked by some rather more serious situations like a child in hospital and a new job with a fair bit o travelling.

The last time I recorded my FTP was a month after I had recovered from my operation last year on the 11 of May, and two weeks before we headed off to Mallorca. Wanted to know how much I was going to suffer after having nearly two months off the bike! I did train for a week before doing the test as I though it would have been too much of a shock to the system, but in hindsight a week wouldn’t event touch the sides. Anyway I did the shorter FTP test on zwift and it returned 208 watts. I wasn’t too disappointed but still apprehensive at the though of some of Mallorcas climbs!

Mallorca was great and I came back feeling knackered but positive so set my sights on another personal challenge of mine, the duathlon. But with other distractions didn’t really get into training until two months before the event in November. I still trained and ended up doing two before the end of the year, again feeling pretty damn good about my achievements and fitness at the time. Don’t get me wrong, they weren’t fast….. on the second duathlon the 1st place man finished just as I was leaving transition for the second run!

Things then slowed over Christmas, except the speed of my eating, and as I mentioned above this year has started a bit shakily. Life has calmed down a bit now, our six month old is well and sleeping better, and I have a bit more time from work. So last night I jumped on Zwift and completed the short FTP test.

How did I do then? 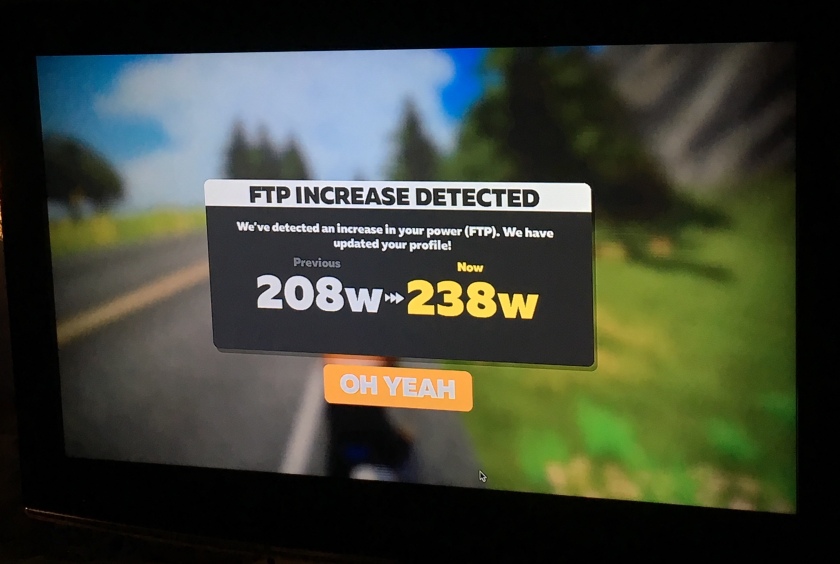 Happy is an understatement! I’m dead pleased. 238 watts! Not bad for a guy that rides on a Sunday….. I New I had had a pretty solid second half of last year but was dreading this after how tired I have become this year, and how much I had over eaten over the festive period.

So after buying some fancy scales I now have a baseline for my training program.

Whilst I’m not specifically weight chasing it would be nice to increase that power to weight ratio. What I’m interested in is raising FTP and reducing body fat. I would like 5% gain on FTP and 5% loss on body fat. I think with sensible eating (not dieting as that always seems extreme, good diet should be how we live. Not a quick fix, and probably wouldn’t be suitable to support a training program) and a decent 4 week training plan I should hope for results around those levels.

The training plan I’m going to jump on is Zwifts 4wk FTP builder.

That’s that then, I’ve made it public! No getting away from it! Whilst I’m really looking forward to it I’ve never successfully completed more than 20 days in a row without getting ill. But I think sessions with structure will really help that, my home brew training in the past has always just been about exhausting myself and hoping not to die! I’m no athlete, I have no coach, I’m just using readily available information and tools to see if they work. Wish me luck!