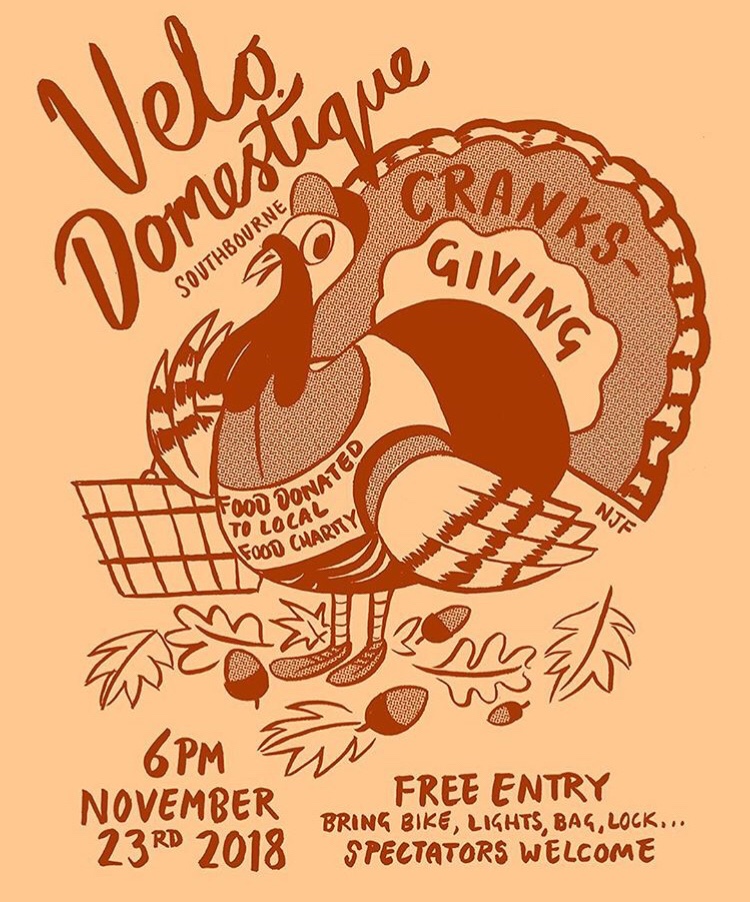 Cranksgiving is a mad tradition in the way of the fixie rider. It’s and event that happens each year around the american holiday of Thanks Giving in which cyclists take to the streets and race like demons for the benefit of charity.

Cranksgiving events are held around the world but there’s only one held in the U.K! and it’s here in Bournemouth at local cycle cafe Velo Domestique. Although Velos Cranksgiving alleycat is in its 4th year, this was the first time I had been able to commit. And now I have the bug, I just loved the whole vibe.

So whats an alleycat I hear you ask? an alleycat is a checkpoint or task based bicycle race with no fixed route. Its down to the individual competitor to use their guile to hit the checkpoints, finish the tasks and return home first. How does that fit into Thanks Giving then? well an alleycat is very easily tuned toward collection tasks, and for thanksgiving it means collecting food for charities. The charity chosen to receive donations from Velo Domestiques Cranksgiving event was Hope For Food, Bournemouth’s food and basic essentials charity that supports people and families that are either homeless or living in poverty. Before we prepared to ride a background of the charity was given by their founder, what really hit home was the quantity of people affected in this way living in Bournemouth. It was difficult to comprehend that in such an affluent town that we actually have children living in poverty, as a father of two it was a bitter pill to swallow. This is why Cranksgiving is a great event to get behind, not only do you get to ride and race, you get to make a difference in your community.

On the night entrants rocked up to Velo Dom at around 6:30pm and readied their whips. As with most alleycats the majority of riders were riding fixed gear, there was a moulton (yep, in a race!), a couple of steel town bikes, and me on full carbon road bike and dressed in full winter power ranger mode. Dan, owner of Velo Dom, introduced the event and charity founder then explained how the race would work. We would all have a set number of checkpoints to head to, buy and collect food items from, with a bonus check point thrown in as well. Ten minutes from the race start entrants were given identical lists from which to work out their best route, heads went down onto google maps and the deliveroo/fixed riders started to program their bike navs. Me? I just worked my route out in my head from 35 years of living in Bournemouth. I was confident I was onto a winner. Ten minutes up we were all on bikes outside Velo, riders were readied, lights were lit, helmets were on, and routes were planned. The shout to go was given and we were off, the pack of cyclists shot off in their chosen directions.

Our shopping list had seven stores to visit, and one bonus stop, and at each we had to pick up an item of food. The locations and pickups were as follows; Aldi Boscombe – tin of beans, Ahmed food store Charminster – rice, Iceland Winton – biscuits, Tesco the Triangle – tinned tomatoes, Asda – cereal, Co-op Bellevue road – sweetcorn, Nisa Local Stanpit – tea bags, and the bonus stop was Bournemouth’s best coffee roasters Bad Hand Coffee. My choice of route was Aldi, Ahmed, Iceland, Bad Hand, Tesco, Asda, Nisa, Co-op, then back to Velo. The first three stops seemed quite a popular choice with about seven of us belting about the same route then choosing different routes after Iceland. I chose to head straight for the special stop at Bad Hand Coffee. The special challenge we had here was to recreate a thanksgiving latte art of a turkey, I’ve never even tried to do this before so this was hard. Especially under time constraints! I managed to draw what looked like a pigeon, and I was happy with that. From Bad Hand my plan was Tesco, Asda (this was fun as Asda in Bournemouth is huge, we had to get cereal, and that’s located the furthest isle away from the entrance. imagine me dressed as a power ranger in tap shoes shuffling as fast as I could across a very busy supermarket on a Friday night!), then over to Nisa, and Co-op on the way back. It was all going well until heading back from the Nisa in Stanpit I chose the wrong Co-op. I headed to Cranleigh road not Bellevue. Thankfully one of the other riders pointed this out to me (we were chainganging to make a bit of time up) and I had to double back. My route had fallen apart and my chances of a top three finish went up in smoke, I bought my sweetcorn and hightailed it back to Velo. I rolled in in seventh. 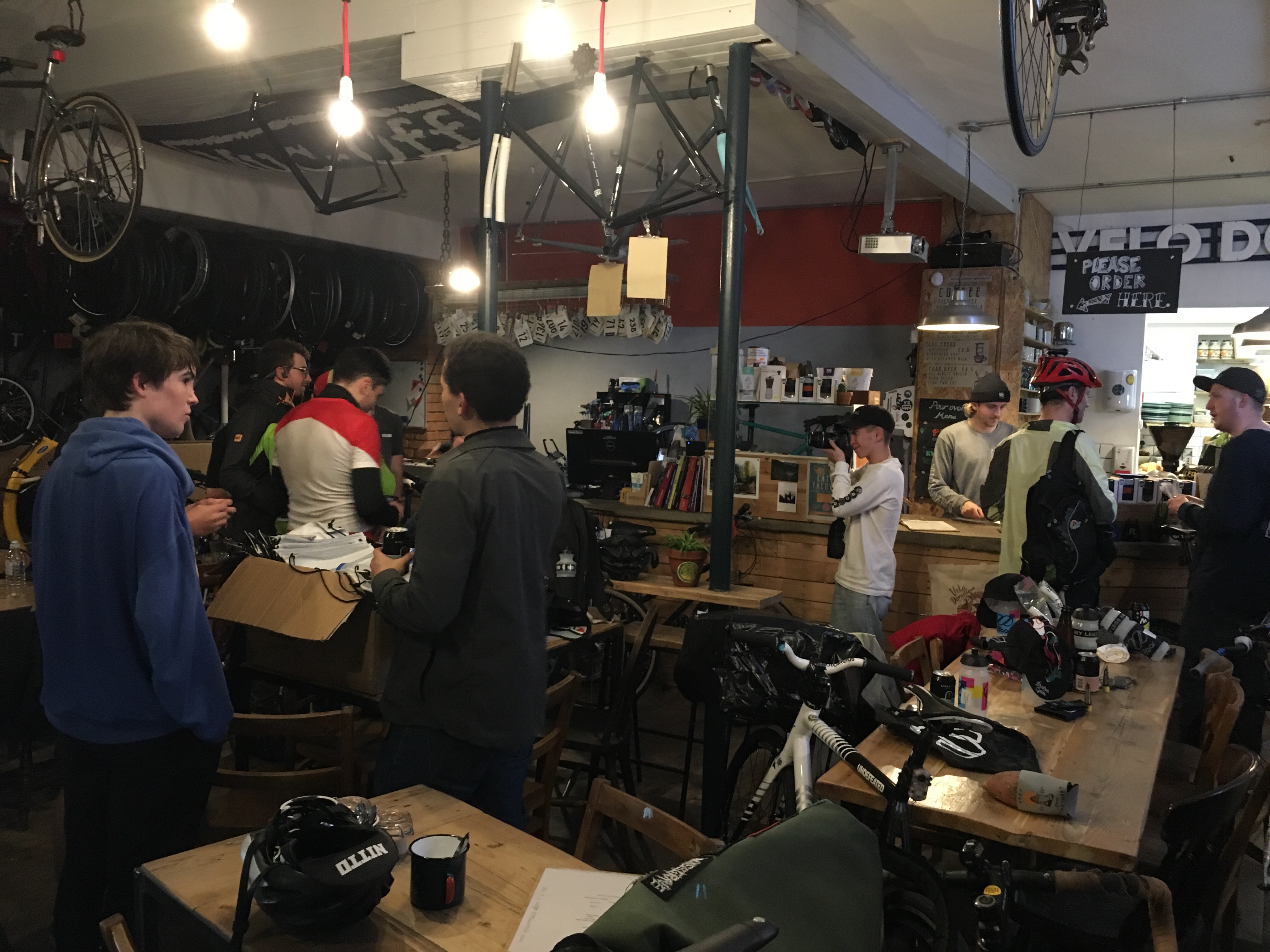 When everyone had returned, receipts were checked and food was handed in. Prizes were then handed out for the first three finishers and for DFL (dead fuckin last!). Some really nice gifts, and a sweet potato for the lantern rouge! Then came the results of the bonus stop…… all riders efforts were projected onto the wall and the most ‘turkey like’ latte art was chosen……. drum roll please……. I WON! yes my latte pigeon was closer than anyone else’s coffee messes. For my efforts I received a bag of Bad Hand Coffees Peru roast. Excellent news!

Prizes out the after party started to roll with some great tunes, great beer (eight arch! go buy some, the session ipa is awesome), and great food. All the riders swapped route stories and tips, moaned about the headwind, and recalled the camaraderie of the evening. I’ve not ridden in an event like this ever, it was competitive, seriously fun, and in the name of charity. I loved it and i’m looking forward to next year…. but I want to see loads more of you there!!! lets see how much we can raise with a few extra sets of wheels.

I’ve put some words on on how I think the local bike shop needs to change to survive. It’s an opinion piece so don’t get shirty if it doesn’t match yours 😂 actually lets chat about it, I’d be interested to hear your thoughts. The LBS needs to know what they need to do! Link to the blog is in my bio! . . . . . . . #cycling #cyclist #blog #blogpost #cyclingblogger #newblogpost #supportyourlbs #supportyourlocalbikeshop #whyiride #cyclingpassion #opinionpiece #opinion #cyclingbusiness #cyclingshop #bicycleshop #bournemouthcyclist #bournemouth #cyclingindustry
Awesome morning for a winter spin. Clear skies and a decent temperature. Got some work to do post hand break, my legs are not where they were before the three months off. Despite all that running! On the flat I’m hanging on but up the climbs I’m toast 😂 privileged to be rocking full @lussobike kit. My new aqua extreme jacket was almost too warm today! I didn’t need a base layer, and the Termico bib tights were ace as well. Finished off with the stealth overshoes keeping my toes warm. Also digging how stiff but smooth the @rinascltabike aero bars are, plus the hand position is soo comfy in the tops. Awesome to roll with these brands 🙌🏼 . . . . . . . . . #instacycle #instacycling #carbonbike #cyclingkit #bestcyclingkits #cyclingstyle #bestcyclingstyle #roadbike #whyiride #fromwhereiride #roadslikethis #thenewforest #roadcycling #roadcyclist #lussobike #rinascltabike #roadbikeporn #outsideisfree #cyclingselfie #cyclingphotos #cyclingshots #cyclingpassion #passionforcycling #bournemouthcyclist
ICE ICE BABY. Super cold in the forest today. Black ice everywhere..... glorious sunrise and little above 0 degrees the whole ride. Glad I was on the gravel bike as I could head to the verges when the roads got too icy. Fantastic to be out on this bike again..... . . . . . . . . . . #gravelbike #gravelride #thenewforest #fromwhereweride #whyiride #rideslikethese #roadslikethese #sunrise #cyclingselfie #wymtm #frosty #cyclingpassion #passionforcycling #instacycling #instacyclist #instacycle #rideyourbike #outsideisfree #bournemouthcyclist
I’m back on the road, broken scaphoid has healed, and it’s a new year. Same old new forest though! It was a bit of a shock to the system despite having trained for and run a half marathon whilst I was out recovering. Legs built lactic super fast and felt very weak! But hey I’m back on a bike so I don’t care! First ride on the new @rinascltabike bars as well, need to play with the hood position a little but dead happy so far. Feel nice and stiff on climbing and buzz free on the flat. Also on a bike that’s non aero I did notice a little less wind noise around the front end so maybe the lack of bolts and lower stack height really does deliver some free speed! And god knows I needed it today 😂 . . . . . . . . . #thenewforest #newforest #cycling #cyclistlife #instacycling #instacycle #instacyclist #instacyclingpics #cyclingpic #roadbike #roadcycling #roadcyclingpics #roadcyclinglove #rideyourbike #wymtm #outsideisfree #cyclingpassion #passionforcycling #bournemouthcyclist #roadcyclist
IM BACK ON A BIKE...... first ride in three months nearly and it’s a clunker expedition through the Everglades. This was a pretty cool experience.... kids on the back, savage headwinds, amazing wildlife (gators everywhere!), and a stunning view at the mid point. Family bicycle adventures are great and can’t wait to get a #bakfiets this year so we can have more of them. Where’s your favourite place to adventure on your bike? And with who? . . . . . . #iwanttoridemybicycle #rideyourbike #bicycleadventures #bicycleadventure #bicycleride #outsideisfree #gooutside #familytime #happyholidays #bicyclelife #bicyclelifestyle #passionforcycling #cyclingpassion #gators #sharkvalley #everglades #watchoutforgators #klunker #coasterbrake #miami #bournemouthcyclist
#medalmonday! @multirace what an awesome event! Flew in from the U.K. on Friday, run the half on Sunday! Beat my pb for a half marathon by nearly 20 mins! At 1:57.33. A super well organised event with a great atmosphere and stunning surroundings. 10/10 will run again! (When I’m back for Xmas!) #run #runner #running #halfmarathon #runkeybiscayne #keybiscayne #runnerlife #runnerlifestyle #livetorun #runmiami #miamirunners #bournemouthcyclist