With the last outing into the forest on the Charge being a wet one (I was out in storm Abigail) I’ve decided I needed some better winter gear. Firstly with ‘winterising’ (to coin a buzzword) the bike. This basically mean fitting some mudguards and adding a winter chain lube. The bike is already a single speed knockabout with challenge open corsa tyres so it’s already winter prone, I just needed to stop the water from the road ending up in my mouth.

A quick stop of to see Andy in Hargroves cycles in Fareham saw me leaving with a set of Zefal Trail guards. It was a bit touch and go whether that they would fit as they are designed for hybrids that generally have a lot more brake and frame clearance but I though I’d give them a try. The main reason was purely for ease of fitting (with no additional brackets or stays) but the price also spoke to me!

Having gotten them home I set about fitting the front. This was easy, straight on no problems, as was just a case of removing the brake bolt and sandwiching the mounting bracket between the caliper and fork. Confidence peaking I attempted the rear expecting same success. Not the case! The clip on the guard that would secure round the seat tube wouldn’t fit as space between frame and wheel was too small. Also the brake mounted bracket would have put the guard against the tyre. Undeterred and in usual style I modified to fit, cutting the clip off and shaping the guard into a v shape so it fitted round the seat tube and reversing the mounting bracket to give brake and tyre clearance. So for £10 I have a set of guards for the winter, that can be removed with two bolts or just by sliding the plastics off their mounts. Bargain. The rear would have been easier to fit if I didn’t run my rear wheel so far into the frame as this would have given increased tyre clearance, but I didn’t fancy popping a new chain on just for that!

Let’s get out and see if they keep me dryer than previous! Now to source Castelli Gabba and Nanoflex! 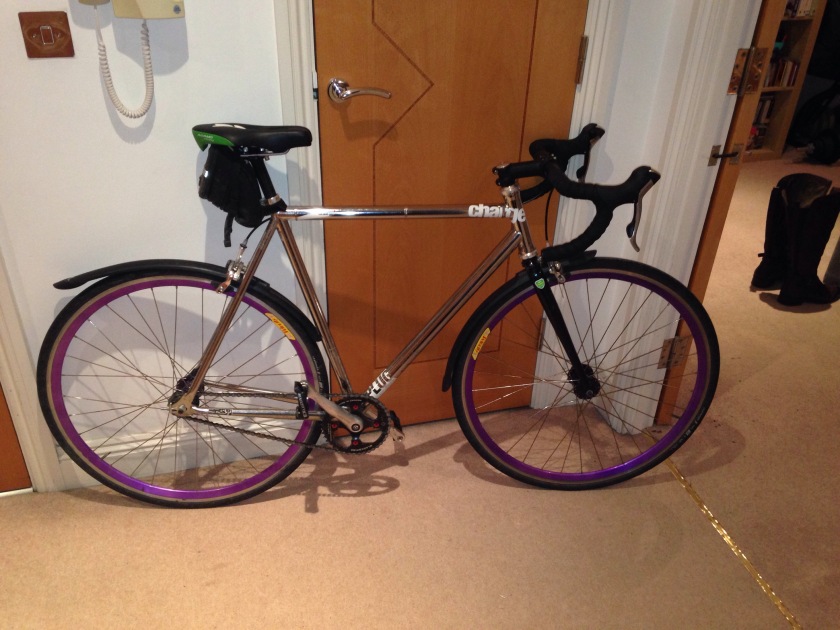